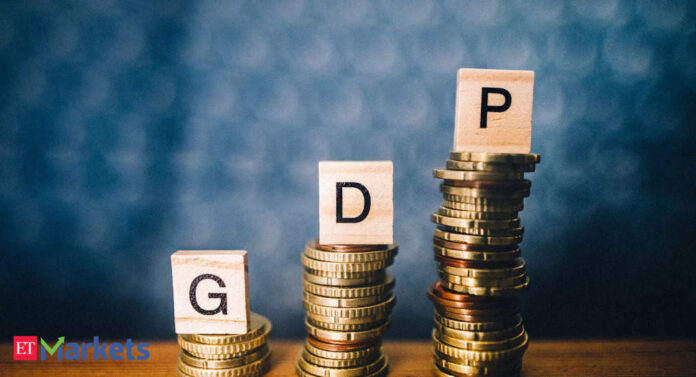 The profit after tax (PAT) to GDP ratio of listed companies, which now stands at a 4.5 per cent level, has significant headroom to expand, said . That said, the brokerage feels that the ongoing quantitative tightening (QT) cycle will keep a check on excessive valuations in the stock market.

The domestic brokerage, which has a Nifty50 March 2023 target of 19,000, said it prefers themes based on investment rate, discretionary consumption and improving credit growth.

In a strategy note, the brokerage said the impact of operating and financial leverages are yet to kick in, given that the trailing return on equity (RoE) of the Nifty50 index has only reached 15 per cent against the peak RoE of 25-30 per cent in FY07-FY08.

Aggregate profit of listed India Inc stood at Rs 11.2 lakh crore, or 4.5 per cent of GDP on a trailing 12-month basis (TTM) and the bulk of profit expansion came from the mean-reversion of depressed profits and loss pools.

The loss pool, which stood at 0.6 per cent of GDP, is down from a two-decade high of 1.8 per cent in FY20. It has further scope to reduce as the peak earnings cycle ‘loss/GDP’ ratio was at 0.2 per cent in 2007, ICICI Securities said.

“Manufacturing and services activity remains robust with signs of declining input costs: PMI-manufacturing and PMI-services at 56.2 and 57.2 respectively along with GST collections at Rs 1.4 lakh crore for August 2022, are robust. However, exports stood at $33 billion (flat YoY) while imports surged to $61.68 billion reflecting robust domestic demand. Credit growth improved further although core sector growth moderated: Fortnightly non-food credit growth in August exceeded the 15 per cent YoY mark. Core sector growth in July, however, moderated to 4.5 per cent,” the brokerage said.

ICICI Securities said monsoon progress across the country continues to be above average so far (except parts of east India), which is positive for rural India demand. The investment cycle, it said, remains conducive with large-scale capex announcements by capital-intensive corporates and a pickup in real estate cycle across India after a decade of underinvestment.

ICICI Securities said the quantitative tightening (QT) cycle continues and is well acknowledged by investors, thereby acting as a limiter to equity valuation expansion. However, the driver of the QT cycle is the inflation trajectory, which has shown initial signs of a peak formation along with a dip in commodity prices.

“Unprecedented selling by FPIs on extreme QT cycle expectations begins to reverse driven by buying into domestic economy stocks. We maintain our March 2023 target for the Nifty50 at 19,000 given the positive outlook for profit, credit and investment cycles. However, we do not anticipate the earnings yield to breach the floor of around 5 per cent on the downside in a QT environment,” it said.

Among stocks to bet on in the investment rate theme, it likes L&T, NTPC,

In the consumption theme, it likes

In the financials and credit growth theme, it likes SBI, IndusInd, ABCL, SBI Life, SBI Card and Angel One.